Castling The King In Chess

Castling a king in chess is a special type of move in the game of chess that involves a king and a rook. To complete this process, you have to move your king two squares left or right on the first rank towards the rook, then move the rook to the other side of the square just next to the king that it crossed. 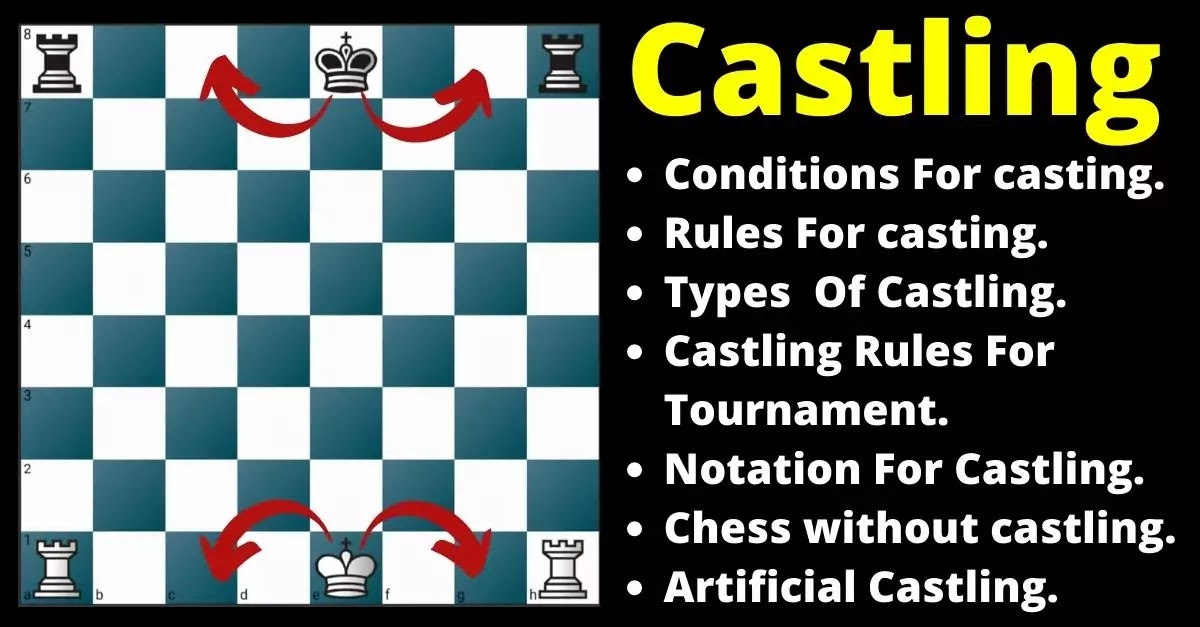 Castling is such an important step that is necessary for the security of your king. With this, both your rooks come closer and take your game to a better position. It also protects some weak pawns on your back rank.

So experienced players often attempt to set up an advantageous castled position for themselves. Castling always occurs under very specific rules, however, so beginners should avoid attempting it until they have learned those rules.

You can actually move two pieces at once with this unique chess move. It is the only move other than a knight that allows one piece to “jump” over another.

Read and learn how to castle safely with our clear, easy-to-follow lesson. After you’ve mastered caslting, you can go on to study other techniques like sacrifices, etc.

The rules for castling are simple. First, you must move your king two squares toward a rook on your first rank (which is why it’s called castling). Then, you may move that rook to an empty square next to (but not diagonally) your king.

Note, castling cannot be done, if there is a piece between your king and rook. In chess, castlings can be made only once for each player per game. 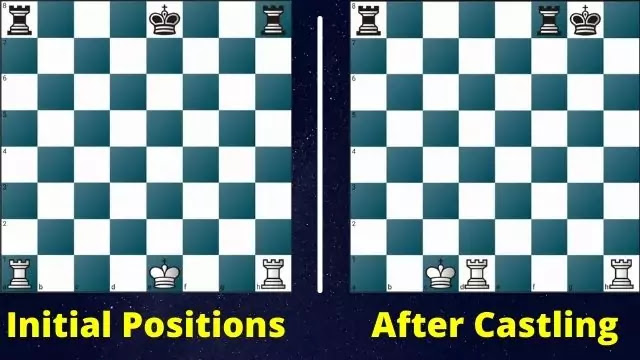 There are 2 conditions for castling in chess-

1. The first condition is that both your king and rook must not have moved previously in a game.

2. The second condition is that there must be no pieces between your king and rook. If there are any pieces (such as Bishop or Knight or queen) directly between these two, then castling will not be possible.

There are 2 types of castling in Chess-

It is also called kingside castling or short castling. When your king moves to the g file towards the nearest rook, it is called short Castling. It is represented by 0-0 in both descriptive and algebraic systems and O-O in the PGN (Portable Game Notation) system. 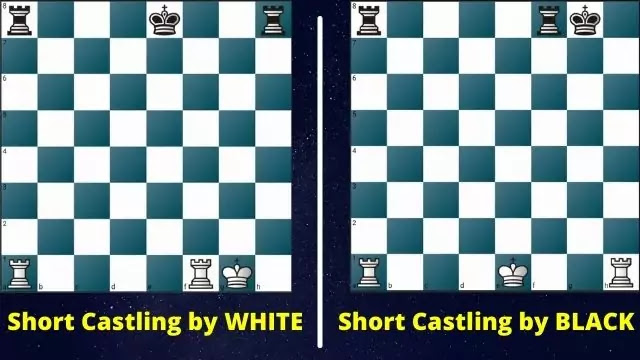 It is also called queenside castling or long castling. When your king moves to his distant rook mean queen’s side on c file it is called long Castling. It is represented by 0-0-0 in both the descriptive and algebraic systems, and O-O-O in the PGN (Portable Game Notation) system. 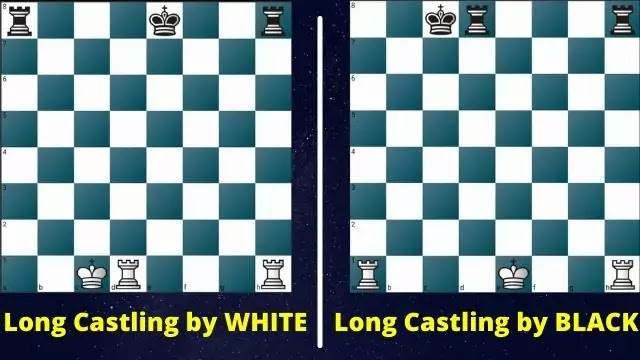 NOTE: Are you curious to know about Fool’s Mate? If yes, then definitely read this article. Fool’s Mate

In chess, castling is a special move to bring a king closer to its rooks. A player can only build a castle if there is no other piece between his rook and the king.

Players must meet several requirements to castle and castling is not allowed under all circumstances. Castling can only be done if all of these conditions are fulfilled. There are five simple rules for chess castling–

1. The king and the particular rook must not have been previously moved. 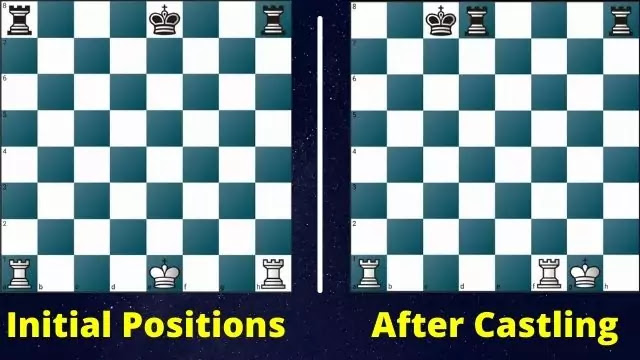 2. There should be no piece between the king and the rook. 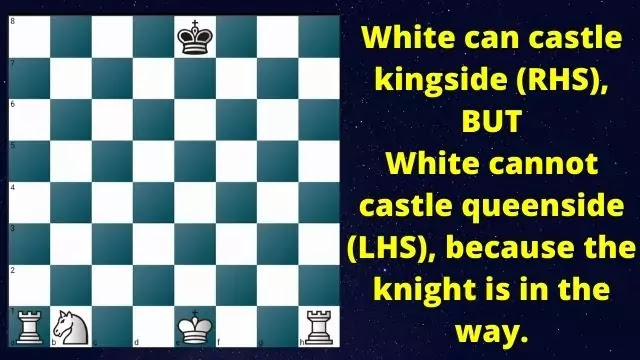 3. At present, there should not be any check on the king. 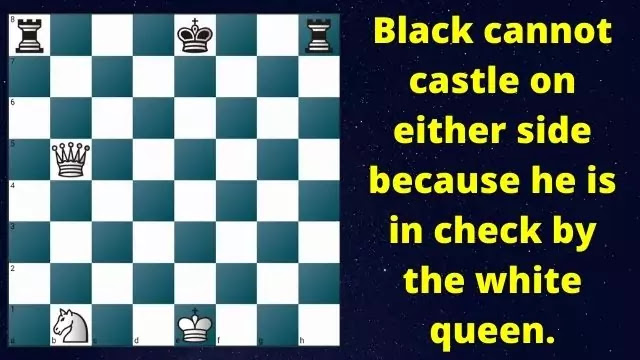 4. King should not pass through the square which has been affected by the enemy’s attack. 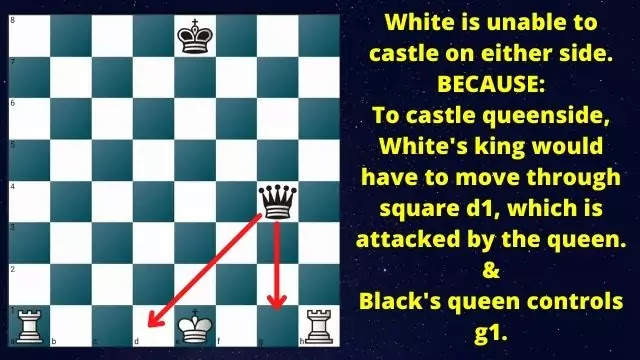 5. After the Castling process, your king’s position should not end on the square in check. 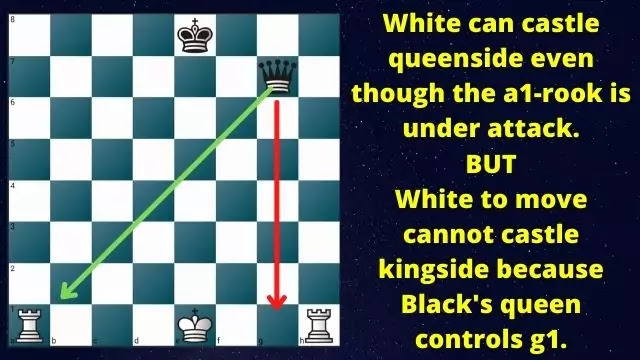 Origins of Castling The King

Castling is a chess move that dates back to around 1100 when it was written about in an English manuscript. The earliest surviving evidence of castling comes from an Italian manuscript from the 13th century, but people believe that it originated much earlier than that.

The origins of castling aren’t entirely clear, but many historians believe that it evolved from a rule involving pawns.

The main reason for the creation of this rule is believed to be the long-term advantage of the chess strategy. Castling may have evolved to avoid having to use too many pieces on the king’s defense, so they tried to castle from the side of the board.

The earliest recorded mention of castling appeared in an Italian manuscript from the 13th century. The Rules of Blodeling, written by a Flemish player Van der Linde in 1476, is considered to be one of the first treatises on chess.

He suggested that castling could only be made for white. White can castle but Black does not counter castles. Changes were made to this rule, and both sides can castling in the game today.

The rule of touch-move is in force in almost all tournaments in the world, based on this, castling is considered a king’s move, which is why the king must be touched first. 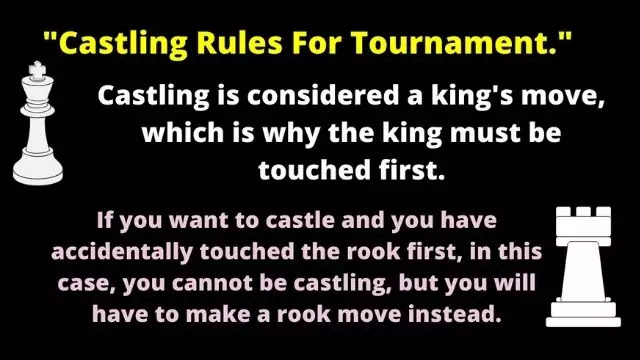 If you want to castle and you have accidentally touched the rook first, in this case, you cannot be castling, but you will have to make a rook move instead.

Under the current rules of the United States Chess Federation, a player wishing to castle, accidentally touches the rook first is still allowed to castle, provided the castling is legal. In such a situation, there is no provision of punishment for this chess player. However, the correct way is to move the king first.

In 2019, former world chess champion Vladimir Kramnik had put a new type of idea in the world of chess. Accordingly, players will not be allowed to Castling. 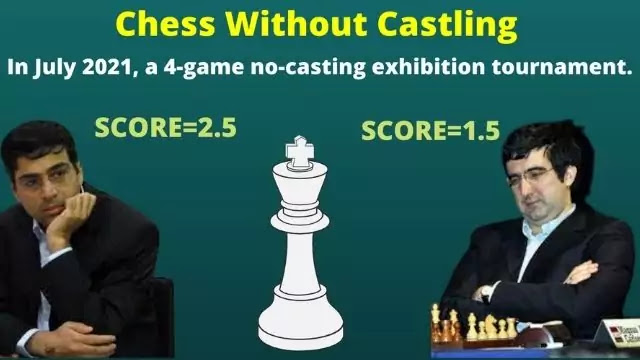 In this situation, the king is constantly in an unsafe position, which would theoretically lead to more decisive games. It would be quite difficult to force a draw in chess played with this idea.

Kramnik suffered a defeat in the first game, allowing Anand to win the tournament with a score difference of 2.5–1.5. Both the players called it a successful experiment.

This type of castling is also known as hand castling . A player uses this technique when his opponent moves his king or rook from his original initial position. This is such a trick in the game of chess, using which a player gets the position of the castle without being a castling.

Castling in chess is a special move that every player should know about because it helps protect your king and activate your rook. This allows you to defend against checkmate and get your rooks more involved in the game. If you are a beginner in chess, then I advise you to get castling as soon as possible.

The most common time to castle in chess is when you have one or more pawns ready to advance, as it’s often advantageous in getting your rook onto the open board faster so you can control more squares.

Q 1. What is castling the king?

or what is castling in chess?

or what does castling mean in chess?

Ans: Castling is when you move your king two squares and then move your rook onto an adjacent square. This can be done in a number of ways; however, if there is another piece that can capture a rook before castling, castling can not be performed. This is referred to as invalid castling and leads to illegal moves. If you are planning on doing castlings it’s important to know all of these rules beforehand so that you don’t break any of them.

or How Do You Castle?

0r When Is It A Good Idea to Castle?

Ans: A player can castle only when the king and the rook are in their initial position, and there are currently no other pieces between them.

Q 3. Which side is better to castle on?

Ans: This is perhaps one of chess’s most hotly debated questions. There are arguments for both sides, kingside castling is generally preferred to queenside castling. According to many chess masters, on one side of the board where the opponent is active, it is more appropriate to castle on the opposite side.

Many beginners get confused about which side of their king they should castle. The answer is pretty simple, though. Ideally, you’ll want to castle on the side of your choice of the board. As long as it’s not your opponent’s turn, there are no restrictions on castling – so theoretically you could castle any side if that’s what is in your best interest.

Q 4. What are the benefits of castling in chess?

Ans: When you castle, you double your protection of your king because a rook protects every square that is in front of or behind it. This allows you to set up a stronger attack while making it more difficult for your opponent to break through and capture your king.

Q 5. How does castling work in chess?

Ans: An important part of learning how to play chess is understanding all of its many rules and movements. To understand how castling works, you must also learn about the movements of the rook. The king moves two squares to either side of its original position, while your rook goes in front of or behind it. The most common use for castling is to protect against attacks by the enemy.

Ans: There are a few other rules for castling you should know about—

1. If either your king or rook has moved previously, castling is not allowed.
2. The king can’t move through check or in check.
3) There must be no pieces between your king and rook.
4) King should not pass through the square which has been affected by the enemy’s attack.

Q 7. What are the 3 conditions in castling in chess?

1. The king and the rook should not move previously.
2. The square on which each intends to castle cannot currently be attacked by an enemy piece.
3. Each king must be in his starting zone (the area nearest his own side of the board) and not more than one square away from it.

Q 8. What are the two types of castling in chess?

Ans: In chess, there are two types of castling. The first is known as kingside castling or closed castling, where you move your king and rook in a single move without moving any other pieces. The second type of castling is known as queen-side castling which involves only moving your queen and not your king nor rook.

Q 9. Can you castle vertically?

Q 10. Who invented castling in chess?

Ans: King Henry I from England, also known as Henry Beauclerc, is said to have invented castling in chess during his play with his daughter called Constance sometime around 1100 AD. During one of their games, Henry was able to evade capture by using castling. He realized that it offered greater protection to both his king and rook, and introduced it into his own rules for play.