Checkmate In 4 Moves and the term “Scholar’s Mate” both have the same meaning. How wonderful it would be that you beat your opponent after only four moves. You can definitely imagine how much you will feel proud of yourself with this checkmate. This checkmate is achieved by playing white pieces only in the fourth move, hence it is also called ‘the 4 move checkmate’. 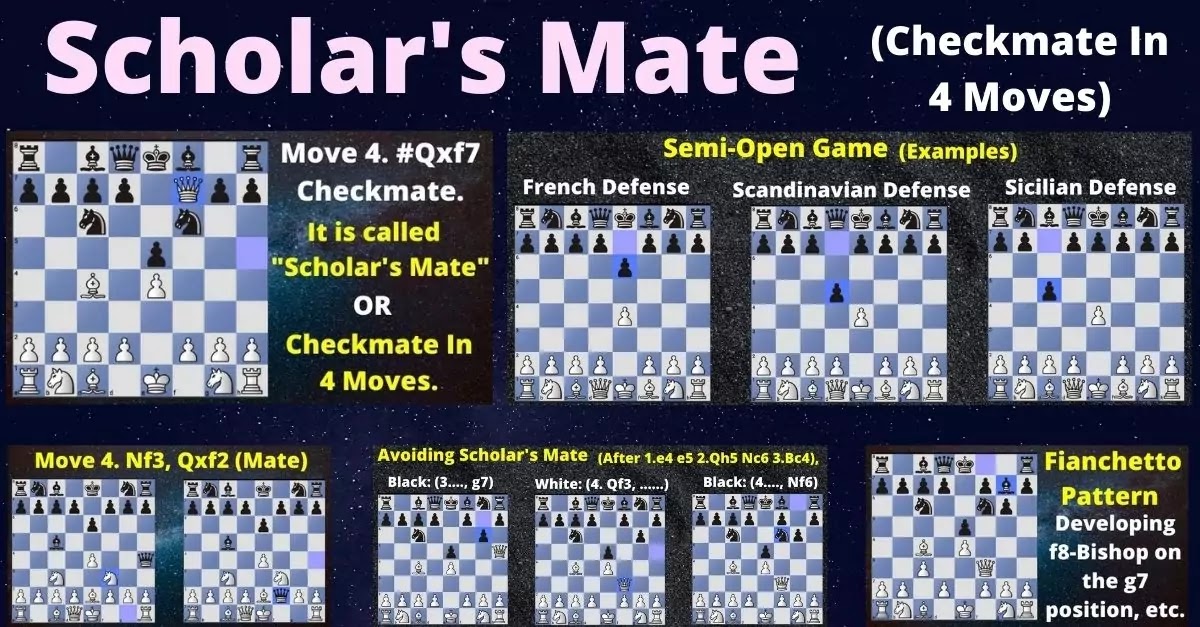 How To Win In Chess In 4 Moves

1. White starts with e4, while Black answers with e5- 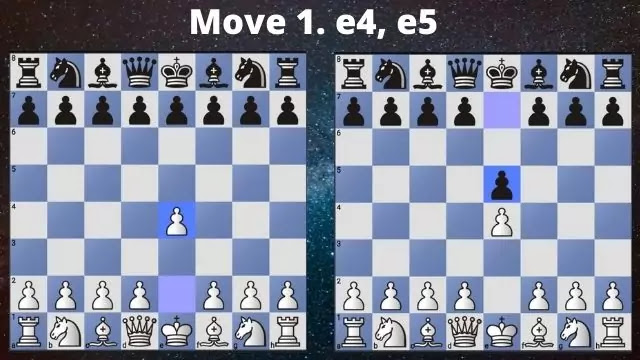 for example checkmate in 4 moves

2. You attack the e5 pawn by placing the queen on the h5 position, while Black moves his knight to the c6 position to avoid it- 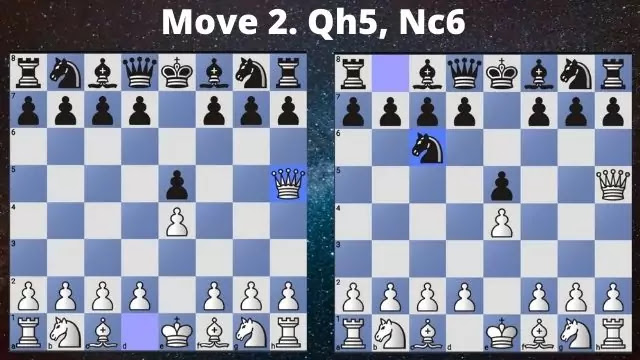 3. Now you double attack the f7 pawn by placing your bishop on the c4 position, which shocks your opponent, and he wants to go away your queen by placing his knight on the f6 position. Black made this very wrong move- 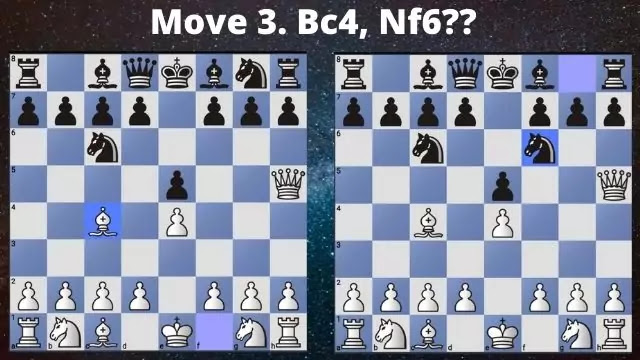 here, how to win in chess in 4 moves

4. Now you (White) perform “Scholar’s Mate” by capturing the f7 pawn from your queen on the support of your bishop- 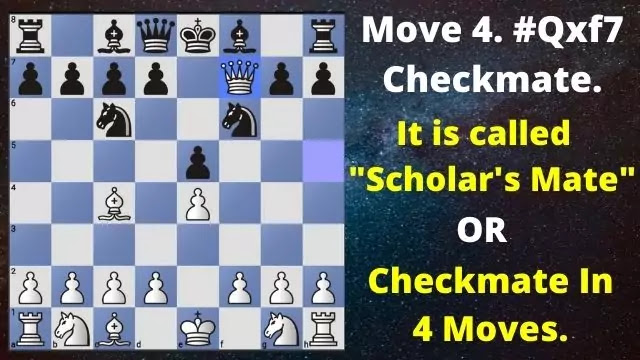 For example, how to win chess in 4 moves

It’s a short combination of four moves, the purpose of which is to reach the same mating pattern by different moves. Here white is targeting the f7 pawn. The bishop supports the queen from the c4 square. However, there are many other ways to checkmate in four moves in chess.

Principle of the Scholar’s Mate

Despite this, Black does not provide any support on the f7 pawn. The white queen takes advantage of this by capturing the f7 pawn in the fourth move, and becomes the black king’s checkmate, thus succeeding Scholar’s Mate or Checkmate In 4 Moves.

Gioachino Greco Cosentino (1600 – 1634), was an Italian chess analyzer, a great writer, and a wonderful chess player. He collected some early chess moves in one place. His game was full of great combinations, which have always been useful for players. 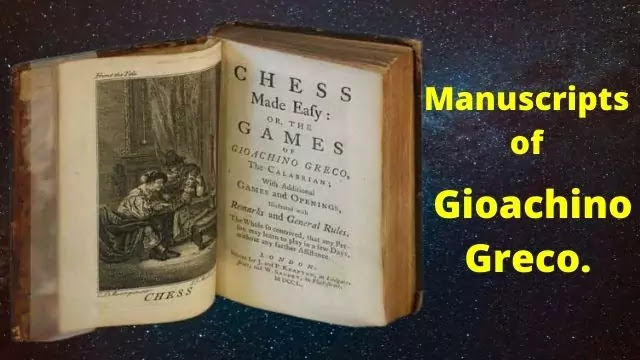 Similarly, how to win chess in 4 moves

Greco’s knowledge of chess was in the form of manuscripts, in which he explained the rules of chess, and explained how to play chess, and he produced wonderful games. These manuscripts were later published to audiences, which became very influential to chess players after his death.

Francis Beale was an English writer. He is the author of the great book of chess called “The Royall Game of Chesse-Play”, which was released in the year 1656. This book has been produced by Gioachino Greco by translating the manuscripts on Chess. The book was reissued in the year 1750 and again in 1819. 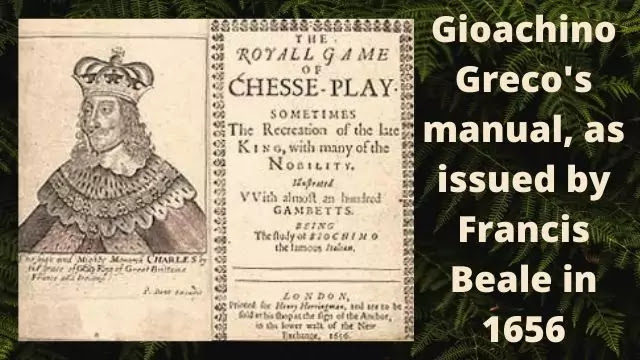 In short, how to beat someone in chess in 4 moves

Black’s version of the Scholar’s Mate

When the roles of the players are reversed, it is also possible for the player playing with the black pieces to achieve exactly the same checkmate under the condition of Scholar’s Mate.

Black can also beat White in the same fourth move, this is called black’s version of the Scholar mate. In both versions of the Scholar’s Mate opening, the principle of play is exactly the same. The following steps may be involved- 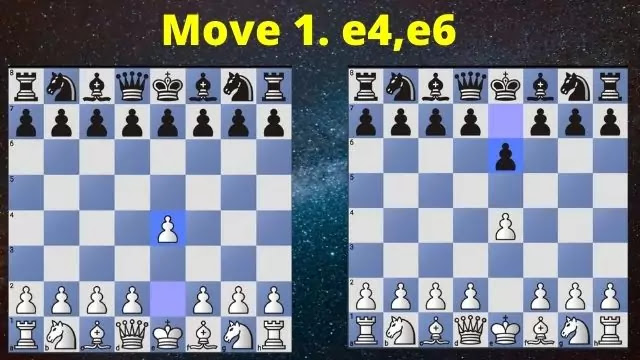 Again, how to win a game of chess in 4 moves 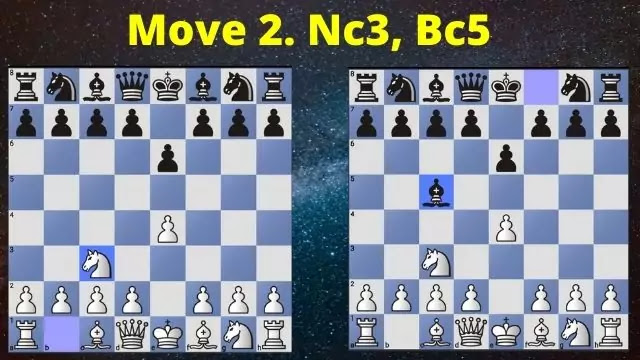 3. Normally White now places his bishop on the e2 position, in response, Black now puts his queen on the h4 position and double attacks the f2 pawn 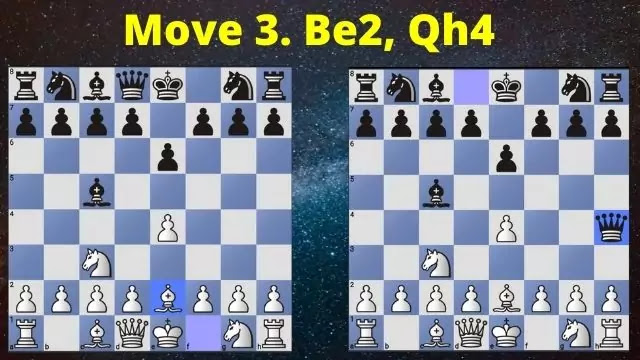 Similarly, how to win chess in 4 moves as black

4. white wants to go away from black’s queen by placing his knight on the f3 position. white made this very wrong move because black perform “Scholar’s Mate” by capturing the f2 pawn from the queen with the support of his bishop. 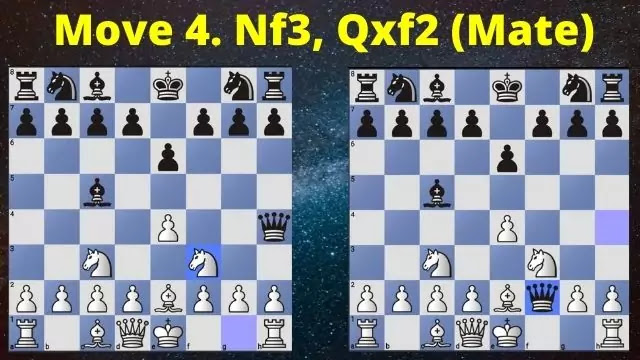 For example, Checkmate in 4 moves puzzle

Scholar’s Mate is the exact opposite of Fool’s Mate because fool’s mate rarely happens with any player at any level. Scholar’s Mate is something special because it is very common among beginners. However, it can be easily controlled.

When White starts with 1. e4, and Black answers it with 1….,e5. This is called Open Games or Double King Pawn Games (or opening). 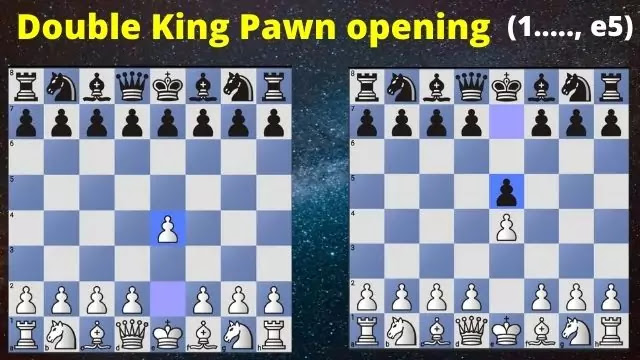 Further, how to get checkmate in 4 moves

Now if you want to escape from Scholar’s Mate, Black has to do something different instead of 1…e5. It would be best for Black to come under a semi-open defense (or opening), such as the French Defense (1 … e6) or the Scandinavian Defense (1 … d5). or Sicilian Defense opening (1 … c5) should be adopted. By these openings, Black completely eliminates the chances of Scholar’s Mate being successful. 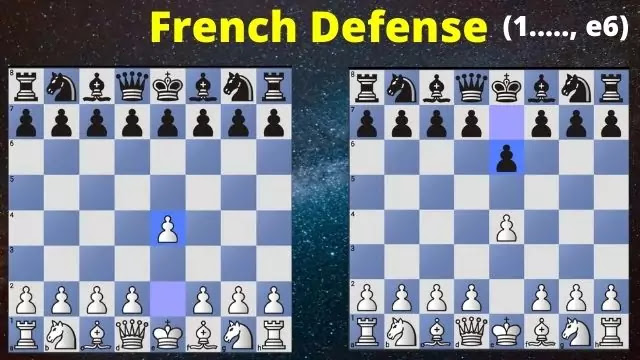 For example’ scholar’s mate in chess 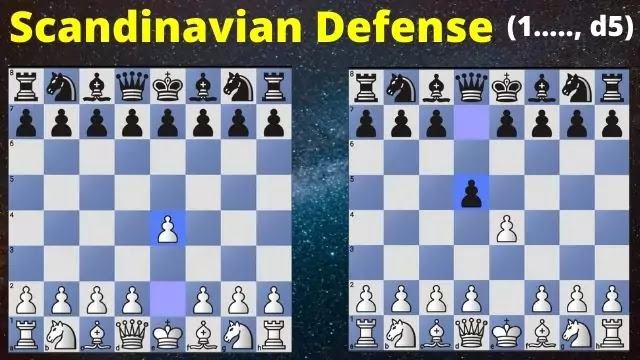 For example, how to scholar’s mate 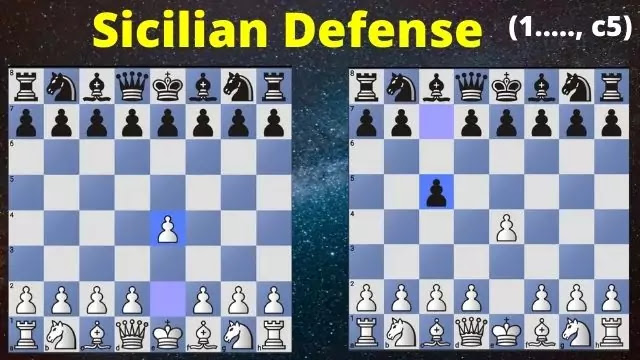 Here, it is best to use the  Sicilian Defense opening (1 … c5). Now, 2.Bc4 by White would be a very bad move, as black in response completely eliminates the chances of Scholar’s Mate being successful by moving 2. ….,e6.

Now black’s intention is that he can make the game easier for himself by attacking the white bishop by adopting (3. ….,d5) in the third move. 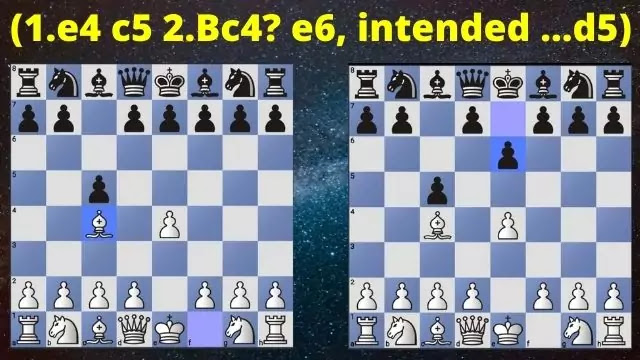 Again, how to do checkmate in 4 moves

Another, how to checkmate in 4 moves

White still has another chance to finish Scholar’s Mate in the form of a 4.Qf3 move. With this move the white queen will make one more attempt to capture the f7 pawn.

Which Black can easily defend by 4…Nf6, and later develop through the fianchetto pattern to the f8-bishop on the g7 position.

After 3rd move of white means Bc4, you can adopt the following two variations. in both variations, black queen protects f7 as well as e5 pawns also- 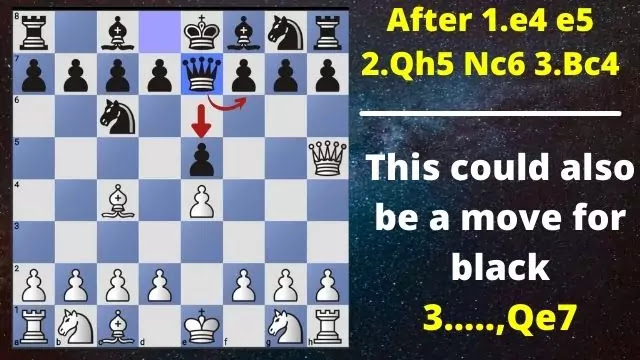 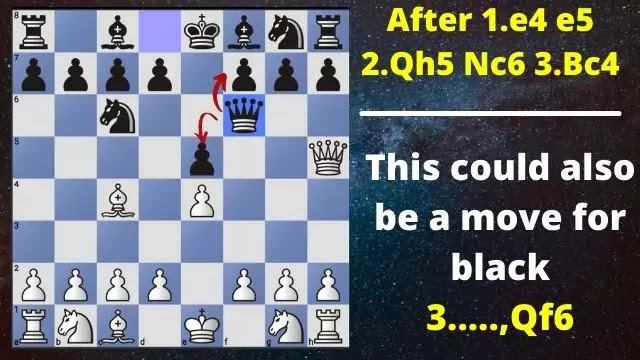 For example, how to do scholar’s mate 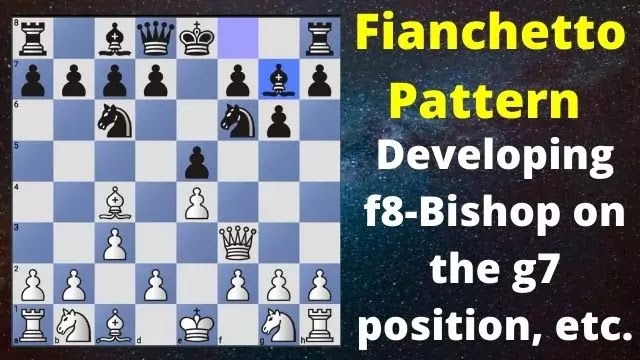 Furthermore, how to checkmate in four moves

When the game of chess starts with the following moves-

That is, when White moves the pawn next to its king two squares ahead (e4). Black would also answer (e5) in a similar way. This is called the “open game” chess opening, it is also known as the “double king’s pawn opening”.

The “semi-open game” is a chess opening in which White plays e4 on his first move, while Black answers it with a move other than ..e5. This opening of Black immediately breaks the symmetry.