The Lasker Trap is a powerful trap derived from the Queen’s Gambit. This Trap comes exclusively from the Albin Counter-Gambit. The trap is named after Emanuel Lasker, who was the world chess champion for twenty-seven long years (1894-1921). The Lasker Trap is a very powerful and dangerous weapon for black players, who use this gambit variation in chess openings.  If white isn’t careful he can get into a lot of trouble, in the opening with his king running around the board.

This opening can be used by a player playing with black pieces in a quick game, which is a good idea, as this trap is rarely played in chess tournaments, which will often leave your opponent unprepared for it.

Black gives white a lure in the center of the board by offering an unsafe pawn, to his white opponent by moving e5 on his second move. As soon as white captures the e5 pawn, Black has a lot of great options.

The most amazing and terrifying 7th move by Black in the Lasker Trap is a very powerful idea. Here is an underpromotion by Black on g1  to win Black the game! It is a very cool Opening Trap for Black. This is a Chess Opening Trick & Trap to win fast.

It is good to know if you want to play it from Black’s side, and want to catch your opponents in the opening. It is also necessary to be aware of it. If you are a Queen’s Pawn player as white, then you will definitely face the Albin Counter-Gambit along with your Chess Career.

The Queen’s Gambit is the chess opening that starts with the moves: 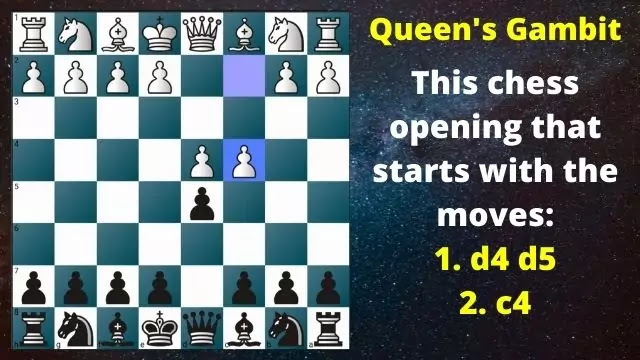 The Albin Countergambit is a type of chess opening that starts with the moves: 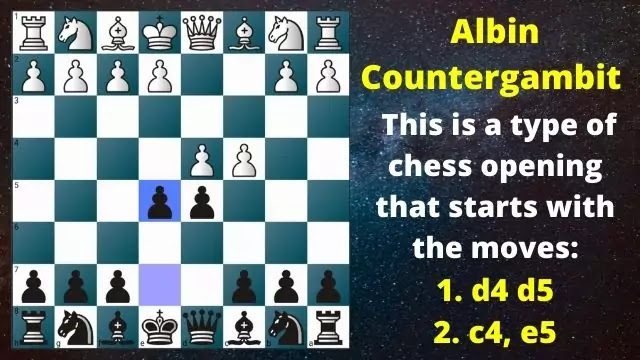 Emanuel Lasker (December 24, 1868 – January 11, 1941): He was a German chess player, mathematician, and philosopher. Lasker was the world chess champion for twenty-seven long years from 1894 to 1921. Which was the longest reign of official world chess champions in chess history. He was one of the most influential players of that time, who is still considered one of the strongest players in history. 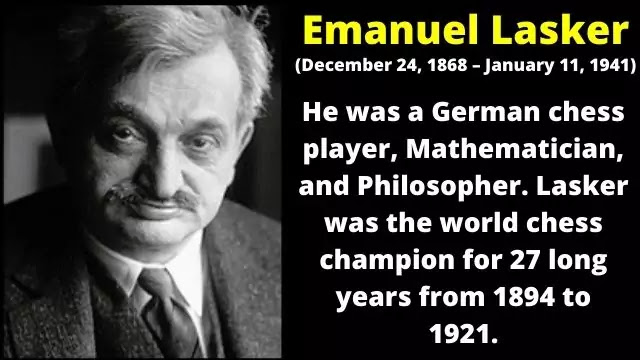 This is a pretty unusual opening trap. It features an underpromotion as early as the seventh move to win you the game. Now, when you promote your pawn to something less than a queen so it could be a rook bishop a knight. really exciting right let’s get straight to it. 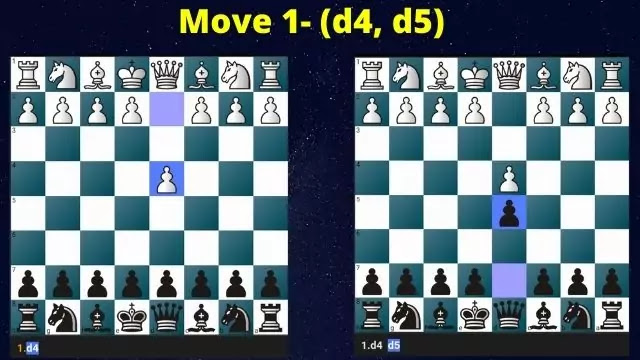 This trap is really useful for players who do play the Queen’s Gambit from the white side. Once your opponents are going to play the Albin Counter-Gambit against you. You should definitely have an idea about the do’s and don’ts. Black well this is a really good opening trap to learn trust me.

Move 3- (dxe5,  …….): So over here our White’s regular, and probably the best way to continue is just accepting the gambit with dxe5. 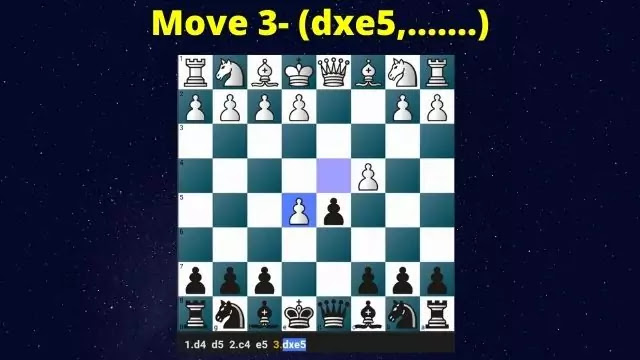 Move 3- (dxe5, d4): Now in this position black goes d4, having a good pawn on d4 gaining space advantage, and putting pressure on the white pieces. You can see this Knight on b1 regulate comes to the c3 square. Now that’s not possible because the d4 pawn has taken away that square. 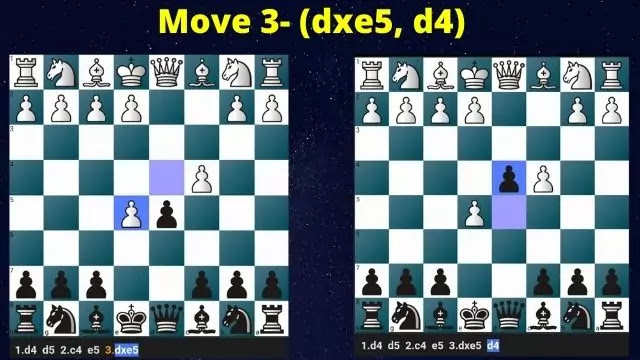 Move 4- (e3, Bb4+): White’s concern here is how to get rid of this d4 pawn! For this, White wants to exchange this black pawn by moving his e3 pawn. Here black’s next move is bishop b4, which is in check on white’s king. 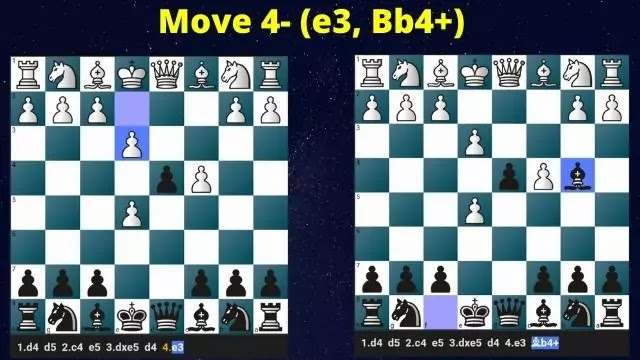 Black goes with Bishop b4 check, and now white has to first get rid of the check. Here are the two ways for white to do that white can play. Bishop d2 as well as Knight d2/c3 and block the check. We’ll have a look at both of them one by one.

Move 5- (Bd2, ……): To avoid this check, you’ll want to bring your bishop in the middle, as you don’t want your knight to be pinned. 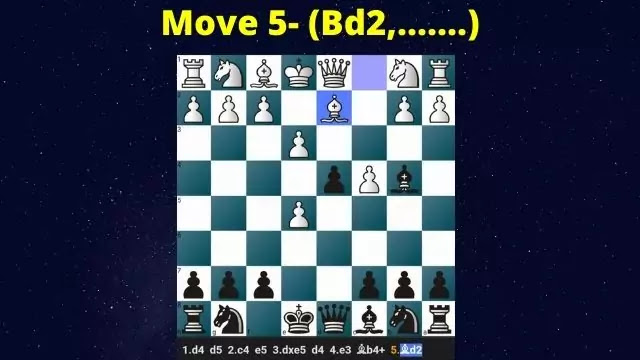 Move 5- (Bd2, dxe3): Now black captures e3 from his d pawn, while black’s bishop is hanging without any support. 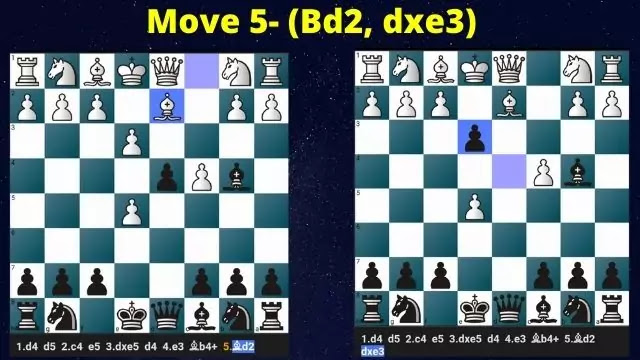 Move 6- (Bxb4, …….): Here white does not feel any particular threat to his king, and he greedily captures the black bishop placed in b4 square from his bishop. 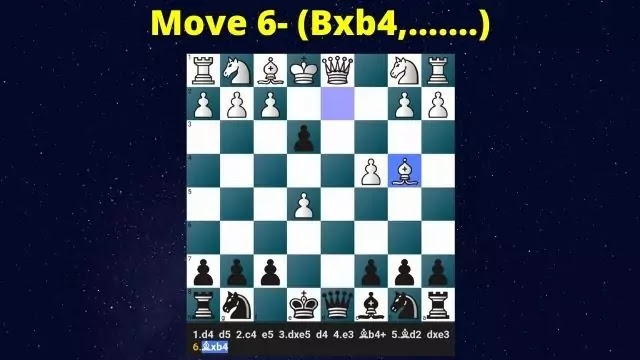 Move 6- (Bxb4, exf2+): Capturing the black bishop by being lured by white is a huge blunder. In this case, Black captures the f2 pawn which is a check position for White’s king. 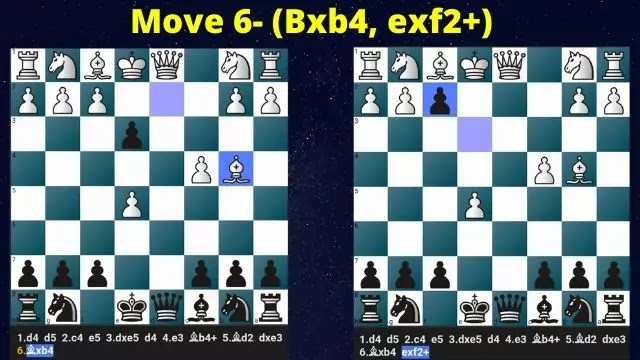 In fact, the white king cannot capture this pawn because his queen is hanging without any support, and the black queen will easily capture this for free.

Move 7- (Ke2, …….): Now the white king is forced to play the g2 move so that both the king and queen are in line, and the king’s support remains on the queen. 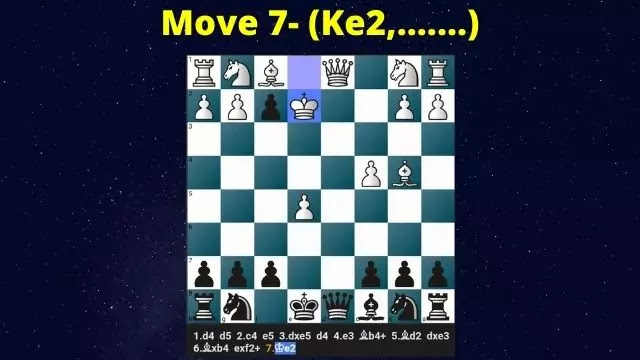 Move 7- (Ke2, fxg1 Knight): Now, Black plays a killer move, which blows the senses of the opponent. Black captures White’s g1 knight from his f pawn and promotes a knight from under promotion. This is a check position for white.

One thing to note here is that white cannot capture this knight from his rook, otherwise in the next move black will capture white’s queen free from his bishop by g4 check. 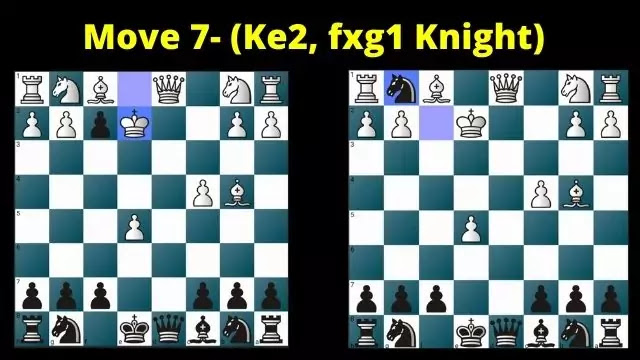 We generally would prefer to play the move Bishop g4 but in this position, if we do play Bishop g4 white gets Knight f3 and that’s not really going to help us. So the point is we have to first capture the knight on g1. Now how do we capture it? If we do capture it and promote the pawn to a queen then white equalizes by simply playing Qxd8, black Kxd8, and white Rxg1. The position is equal.

So let’s go back, What should black do in this position now this was under promotion. The point is black has to play the surprising but very beautiful move fxg1. Promote it basically under promote it and make it a Knight so this is a check and over here we have got off the g1 Knight of white so. If white does capture Rxg1 Black has Bishop g4 check and after king f2, simply picks up the white queen.

let’s go back so white definitely cannot capture knight by rook, so over here why it has to play anyone again because the king has to keep the Queen defended and in this position. Black goes with again we know this move already we have seen,  it a couple of times already.

Queen h4 check and in this position, g3 is not going to help white because black has Queen for the double attack, as you can check on the board the rook on h1 is falling, however, the very where the King moves Qxh1 and black has won the rook. So let’s go back g3 is really not helping white now the best try. White could have in this position is playing the most king d2 and trying to run. See one with is king but this is definitely not going to help white in any way, but is definitely the best try here is black you can definitely continue with knight c6 and you are attacking the b4 bishop.

So if white does capture rook into the knight you can capture the bishop by the knight. You can play Queen d4 and pick up the rook well anything should be winning for you. Basically, why was knight c6 played 96 it was played because now our next idea will be getting the bishop out.

Wherever black going long castles and again giving a check and pick advantage of white uncastle King and this is already meaning for black whatever white does black is already winning in every single variation so yes this is the Lasker trap. 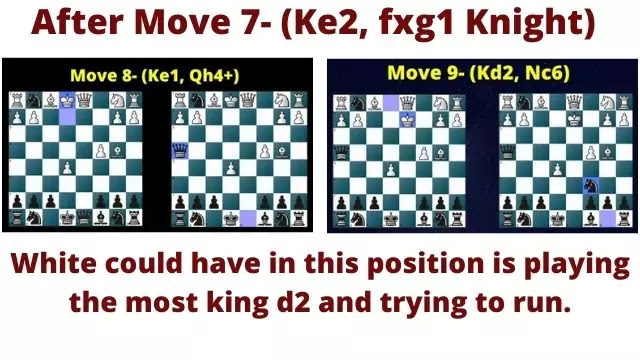 So over here the best way for white to continue is just continue development with Knight f3 attack the d4 pawn. Black responds with knight c6 and the game goes on. Here is a very common mistake in this position is playing the move e3. In this position, it’s pretty natural to do so.

White is expecting and really hoping for black to continue dxe3, then he has Queen into d8 check. He takes away castling from the black king and after Bishop e2. White actually has not just a very good position but he’s also material up. You have to keep that in mind and it’s really easy for him.

To continue over here he can go Knight c3, along with castles, Knight f3, Bishop e2, and the game are really easy, and black does not have any compensation for the pawn lost.

Case II.  See what happens for the move Knight d2, for blocking of this check.

If white does continue Knight d2 black has dxe3 and after fxe3. You see white may be having an extra pawn but his pawn structure is ruined the e3 and e5 pawns are really weak. Here black has Queen h4 check a very typical move in this opening.

After Queen h4 check, g3 is pretty obvious to block the check. Black has a very nice queen before over here threatening to take the h1 rook. You have to note that this Knight cannot capture the Queen because he’s pinned by a bishop and b4.

Here Knight f3 defense rook and over here as black. You can definitely capture Qxe3 but it’s not going to be the best way for you to continue. White has Queen e2 in this position and since there is no e3 pawned later on in the endgame. White’s Bishop will be free to get out and will have squares to go to so definitely not the best way.

This pawn is also quite strong over here taking away squares from your pieces too. So instead of the move Qxe3 let’s go a move back here it’s better to go for the e5 pawn instead. Here, he is basically stopping the knight from developing.

After Bxd2 we just capture night into e5 and black is having a really good position. Considering that white is also has a weak e3 pawn which is a really an important factor in this position. 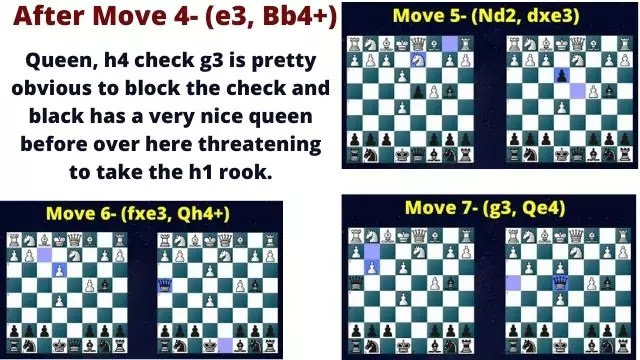 If your white opponent is smart, he won’t be tempted to capture the b4 bishop. If White captures the e3 pawn from his f pawn, Black will still have an advantage.

So after dxe3 let’s first see what white should be doing in this position before we get straight to the trap. White’s best way to continuous fxe3 and it’s probably the only way to continue actually. Power Of this Variation

Black has the typical attack can the Queen h4 check, then g3 by white. Now black Queen’s on e4 actually attacking the h1 rook the e3 pawn as well as the e5 pawn so it’s a triple attack. The point is again to defend the h1 rook white will have to play something like Knight f3 and you have Qxe3 this time because the knight d2 is still pinned by black bishop b4.

Here black is having a pretty good position over here and what is he going to try to do next and what is his idea? Let’s just see how he should be placing his pieces well black should try to get c5 to take control of d4 and the knight c6, castling and the point of my g7 was going Knight g6 to put pressure on e5.

Maybe rook e8 again to put more pressure on e5 so this is going to be black’s idea of development and black is doing fine as I have already mentioned.

I hope you all enjoyed Albin Countergambit The Lasker Trap and I will definitely be coming up with more traps in the next article.