Kieninger Trap is a great chess opening trick to win the game fast. You play it with black pieces. You have to use the trap when your white opponent chooses the queen’s pawn opening, which means start the game with pawn d4. 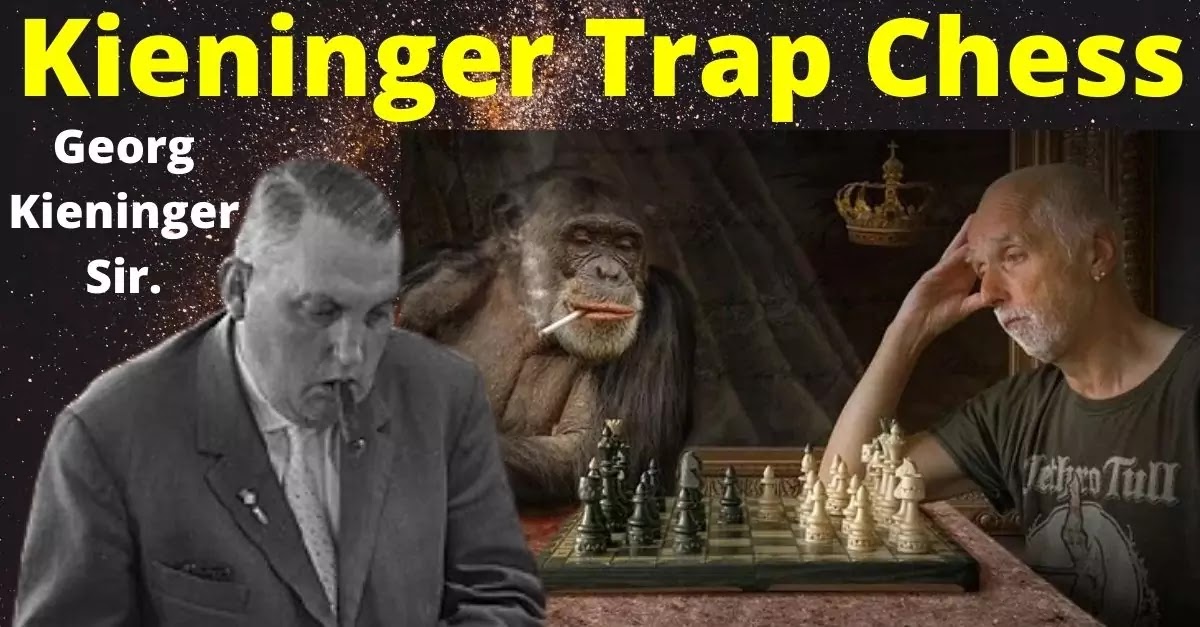 Hello my dear chess friends, through this article I am sharing with you three such killer chess tricks. By using these tricks, you will blow the senses of your opponent. These three chess tricks will be very beneficial for you, that’s why definitely read this article to the end.

The Kieninger Trap is named after Georg Kieninger, a German Chess International Master (IM). He used this trick in an offhand game in Vienna in 1925 against a chess player named Godai.

This term is used to describe a friendly casual game. Such games are often played without a chess clock, the purpose of which is to have a little fun and pass the time.

The Kieninger trap chess trick is named after Georg Kieninger. He was born on 5 June 1902 in Munich and died on 25 January 1975 in Düsseldorf. Sir Georg was a German chess player and International Master (IM). He loved smoking cigars during the game. Because of his attacking style of playing chess, he was nicknamed “Eiserner Schorsch” which means “Iron Georgie”. 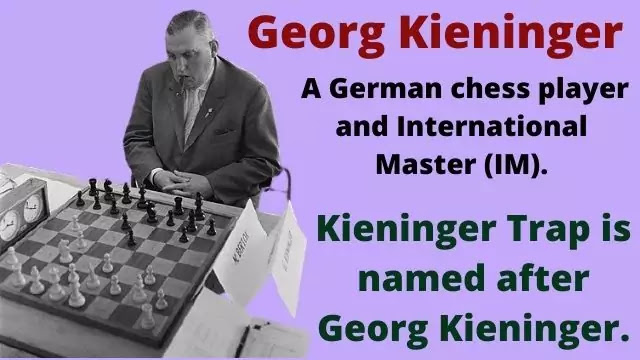 The Budapest Gambit is a chess opening in which black sacrifices his king’s pawn by moving to the e5 square. It is also known as Budapest Defense, which starts with the following moves: 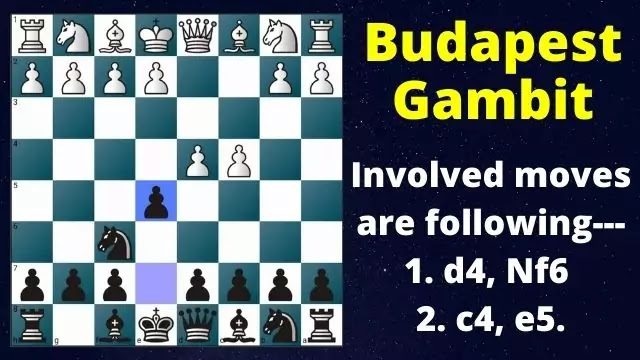 It was played for the first time in 1896, but the Gambit gained prominence in the year 1918, when Grandmaster Milan Vidmar, playing with black pieces, won over Akiba Rubinstein. Nowadays it is rarely played in top-level tournaments because, in its results, the percentage of draws is very less.

The Indian Defense in chess is a type of chess opening, in which Black moves his knight to the f6 square in response to White’s first move d4. Queen’s Pawn Game has its parent opening. Following are the related moves
1. d4, Nf6 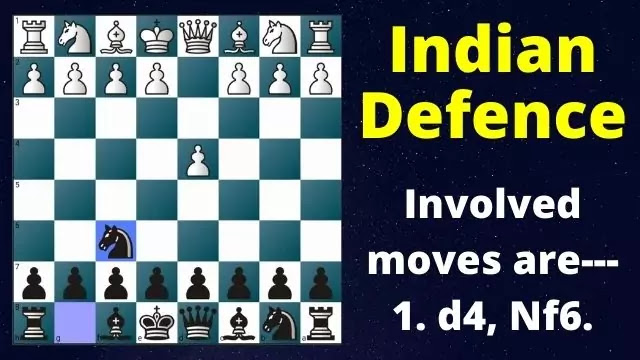 In this opening, Black invites White to establish an impressive presence in the center. Ultimately Black destroys White’s expansion in an effective plan. Nowadays Indian defense has become a popular way to answer d4, as it offers games with equal chances of winning for both sides.

He was a Bengali Brahmin and also known as Mahesh Chandra Banerjee. He was a strong chess player, whose hundreds of brilliant chess games are still a boon to the younger generation. 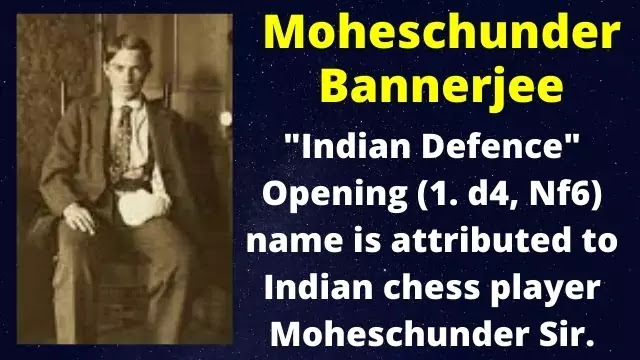 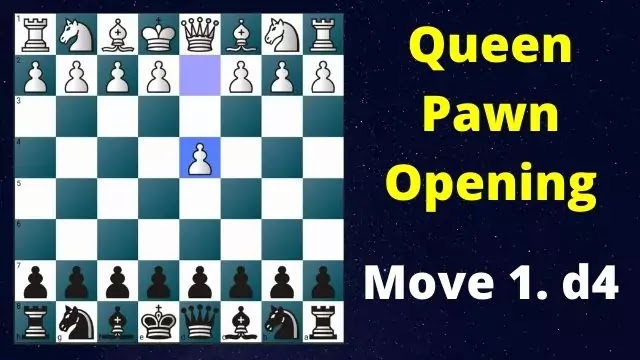 Move 1: Black (Nf6)>> Now you have to take out your knight on the f6 square, this opening of black is called Indian defense– 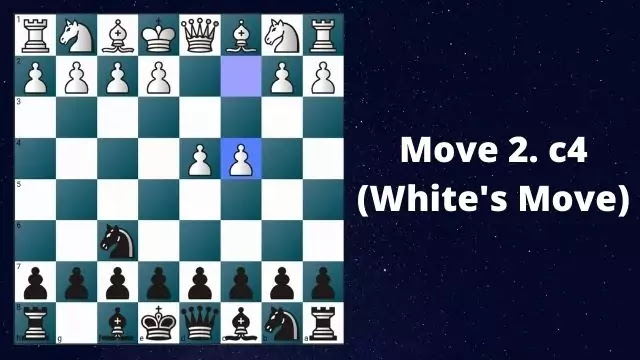 Move 2: Black (e5)>> After which you will slightly surprise your opponent by moving pawn e5, this opening of black is also called Budapest Gambit.

Move 3: White (dxe5)>> Here, White is getting the benefit of a Pawn for free so he will definitely capture it– 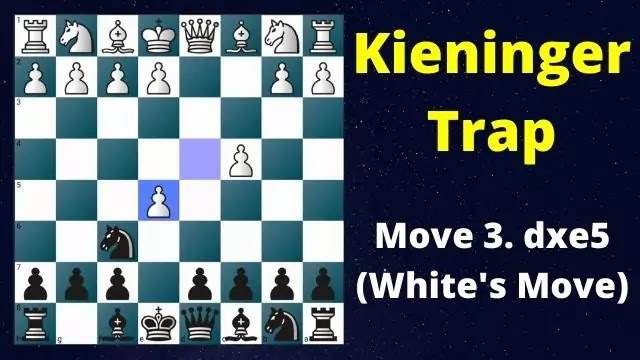 3: Black (Ng4)>> After which, you’ll simply move your knight to attack its e4 pawn from the g4 square. 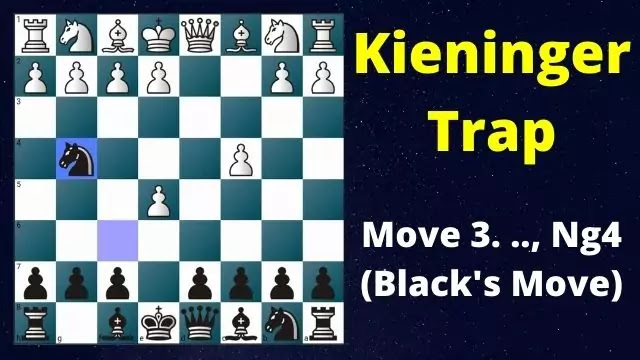 Move 4: White (Nf3)>> To protect his pawn, white will move his knight to the f3 square.

In This Position, I will share with you two amazing chess tricks.

Move 4: Black (Nc6)>> First of all, we will talk about the Knight C6 Reaction. Now Black’s two pieces are attacking White’s pawn. 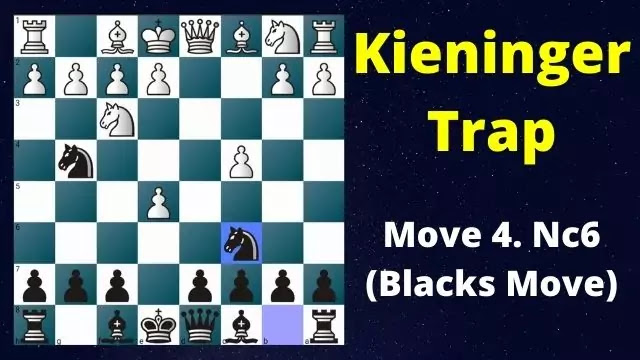 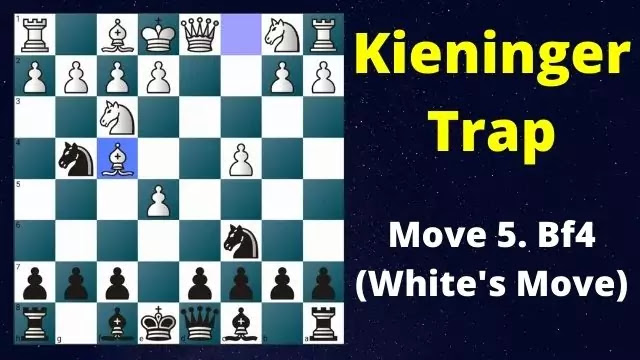 Move 5: Black (Bb4+)>> After which Black gives a check from his bishop to White’s king from the b4 position. 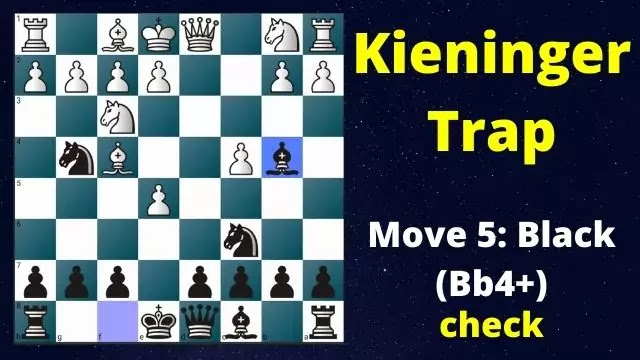 Move 6: White (Nd2)>> Moving the knight to c3 would not be such a good option because it will have a double isolated pawn on the C file after it is captured, which will damage white’s pawn structure. That’s why in this position, white will have to move his knight to the d2 position. 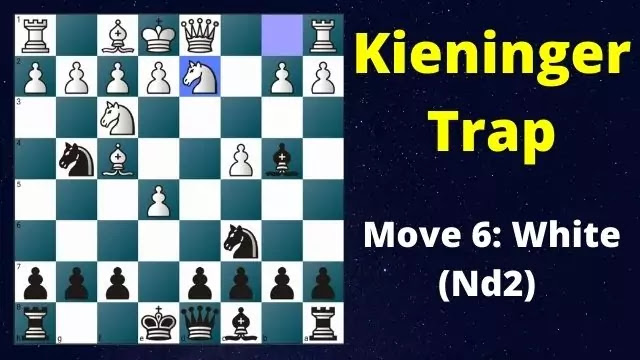 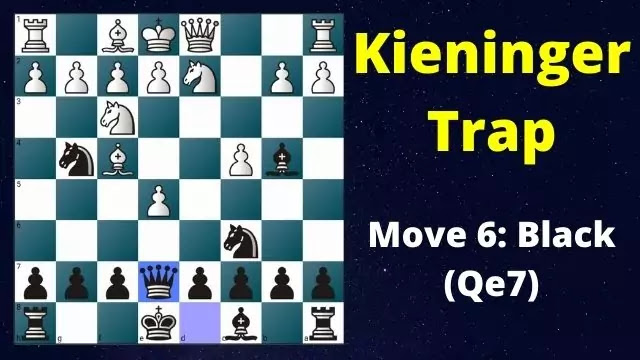 Move 7: White (a3)>> In this Kieninger Trap Chess position, you’ll notice that most players move their pawn to a3 because if you move your bishop back to a5 position, White will move its pawns forward and trap Black’s bishop. 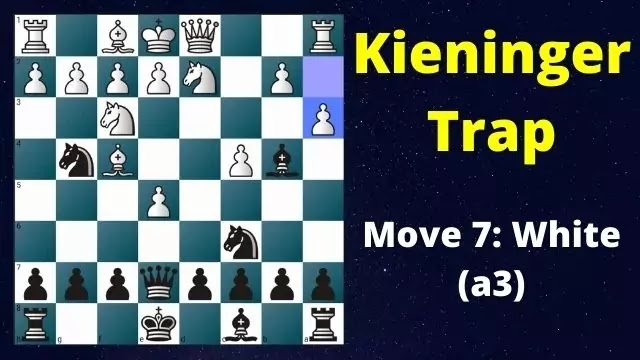 Move 7: Black (Ng4 x e5)>> But in the next move you will surprise your opponent because you will not save your bishop, instead, you will capture his e5 pawn with your g4 knight. 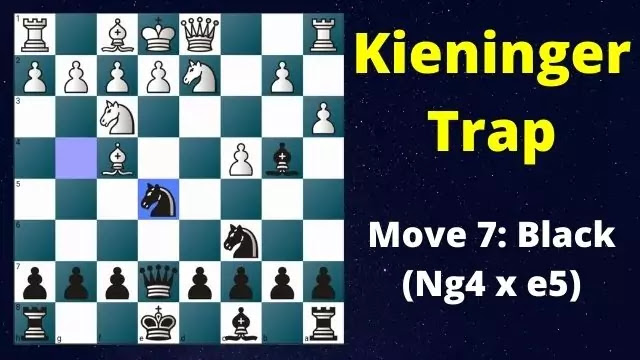 8: White (axb4)>> In this Kieninger Trap position more than 90% of the players get greedy, they see that the knight is getting free and they capture it immediately. 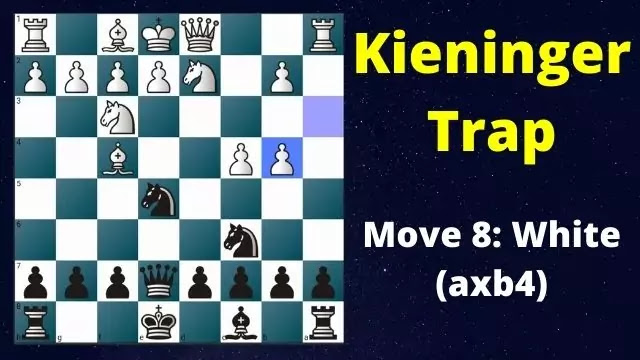 Move 8: Black (Nd3 #Checkmate)>> Seeing the next move will blow your opponent’s senses because you will be moving your knight on d3. 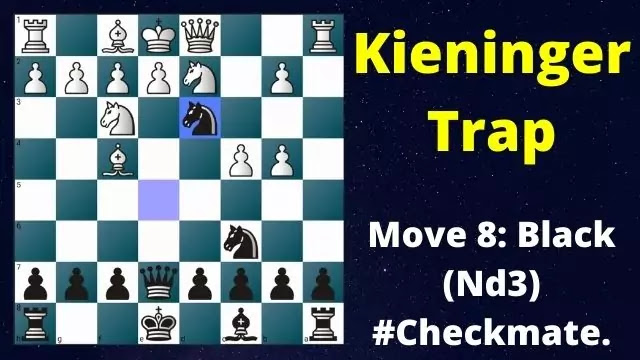 Here White’s king is completely trapped, White can’t even capture Black’s knight with his e2 pawn because the pawn is pinned, with this White’s checkmate is done.

If we go back a few moves in this game and let’s suppose your white opponent is smart, and he knows that his checkmate is going to happen in the next move.

Now Black has to capture the d2 pawn from his bishop and give a check to his king. White will capture your bishop from his queen. Now you have to capture her bishop from your queen. As you can see, both sides have equal material, so even if White doesn’t catch our trap, it will still be a winning game for Black.

If we go back to this game, then in this position you can play another chess trick.

In the previous trick, we targeted White’s e5 pawn and attacked it. This time we’ll do the opposite, here Black will tempt him to exchange the pawn. Black moves pawn d6. As soon as white captures our d6 pawn, you will recapture it with your bishop.

Black’s knight is placed in such an attacking g4 position that most players try to escape it by moving the h3 pawn. But the very next moment your white opponent is surprised because you will capture his f2 pawn with your knight. Simultaneously, this knight is attacking both his queen and rook. White has no other option here, he must capture your knight from his king. with this, white is completely trapped.

In the next move of Kieninger Trap Chess, black will put his bishop on the g3 square. This is a check position for the white king. In this move, you are attacking his king but at the same time, you are attacking his queen as well. White will be shocked when he learns that he cannot save his queen because our bishop is attacking the entire Diagonal, so the white king will have to settle for capturing our bishop.

Now Black’s queen will simply capture White’s queen. As you can see, Black has an extra queen in this position, which is a huge advantage and now Black will win the game very easily.

Many of you must be thinking that, when Black moves the pawn on the e5 square, it is not necessary that White should capture it, instead White can move his pawn even further! In this situation too, Black has a wonderful trick to trap White.

Black will move his bishop on the c5 square, In this condition, you will often see that many players move their bishop to g5, and the black knight is pinned. If you move the knight, the queen will be captured by the bishop. Here, Black’s plan is for White to capture our queen.

Black moves his knight to the e4 square. At the same time, if White becomes greedy, and he captures Black’s queen, then his game is over. Now Black will capture his f2 pawn from his bishop, a check position for the White king. With this, White’s checkmate has been done in only 5 moves.

In this game, if we go back a little bit, and let’s suppose White gets to know that his checkmate is taking place in the next move. Now he has to avoid this checkmate, but at the same time, he has to save his bishop on the g5 square from being captured.

In this position, the white king is trapped and has only one move left to block this check by advancing to the g3 pawns. Now we will capture his pawn with our knight. White cannot capture our knight with his h2 pawn because his rook will be captured by the Black Queen. Now White can move his knight to the f3 square to attack Black’s queen.

In this Kieninger Trap chess case, Black’s queen will be moved backward to h6 square, White still can’t capture our knight because his pawn is pinned. Now White can move his rook to g1 square. Now Black will capture his bishop. As you can see, you have an extra pawn in this position, lots of attacking options, and this is a winning position for Black.